Our professional Julian Dodsworth has a well earned reputation for his advice on all things golf, from equipment to coaching and along with his assistants Fred Jewsbury and Matt Brookes a warm welcome to the club is guaranteed.

Ping, Taylormade and Titleist are available and any product on the market can be sourced quickly due to Julian’s membership of the Foremost buying group, which not only gives great access to products but also keeps the price extremely competitive.

The latest golf balls are available with great care taken to ensure the correct ball for your game. These include Titleist, Srixon, Taylormade and Volvik.

In addition to hardware there is also a fine selection of clothing and shoes for both ladies and gentlemen. Brands such as Footjoy, UnderArmour, Calvin Klein, Green Lamb, Glenmuir, Proquip  and Adidas are stocked and there is always a range of crested garments available.

Lessons, buggy hire and trolley hire bookings are also booked through the shop.

After qualifying in 1998 he built up a very successful coaching business and in March 2008 he became the Club Professional.

In addition to his coaching status, he has become one of the leading suppliers of golf equipment in the Midlands, supplying both members and visitors with the highest quality merchandise, with the best advice, at the right price.

Notable achievements have come in the way of winning the 1998 Warwickshire assistants matchplay title and even more for Julian, the very proud achievement of getting his name on the honours board at Stratford on Avon golf club by winning the Gaydon Trophy (winter league), with then Captain Dave Sutton in 2011.

Julian enjoys partnering the captain, ladies captain, seniors captain and the president in pro challenges, a great way to support local charities and entertain the membership at the same time, in addition to the honour of playing with the Captain in some of the club matches.

Julian is a member of Foremost golf, a buying group which allows professionals like Julian the opportunity to compete with the Internet, both in terms of availability and price.

The weekly newsletters that Julian sends out are the perfect way to reach out to the members, with club news and latest offers included.

Fred has been a part of the team here at Stratford since 2013 and has recently completed his training to become a fully qualified PGA Professional.  Prior to turning Professional he was a well established county player and competed at the highest amateur both in the UK and overseas.  Fred has gained some great knowledge over this time and is now very competent at both club fitting and all aspects of coaching.

Through his good friend Andy Sullivan he has gained invaluable experience listening to the world’s leading coaches on his visit to such events as The Ryder Cup and US Masters. Absorbing this knowledge has only helped his reputation as a sound coach. Examples of this are: Lady member Skye Furnace who has recently defend the club championship, Kieran Weatherhead reducing his handicap from 36 to 13 and well on his way to becoming a single figure golfer and finally the work he has done with Robert Copperthwaite.  Rob and Fred started working together in 2014 with Rob playing to a respectable handicap of 5.  Since then he has reduced his handicap to Plus 2 which is a massive achievement in itself.  More impressively though is that Rob won two major Midland events on his way to topping the 2016 Order of Merit at the end of the season.  In 2017 he hit new highs by winning his County Championship against a field of well renowned local amateurs

"Fred's down to earth, uncomplicated coaching style has helped me understand my swing through feel as opposed to strictly technical, something that makes me feel a lot more at ease and relaxed on the golf course under tournament conditions."

Below is an example of a big change Rob and Fred have made.

The image on the left shows a laid off position resulting in inconsistency, by improving the posture and general plane of swing Rob was able to control his club face throughout the swing resulting in a far more consistent game.

Fred teaches golfers of all ages and abilities and heads up our thriving Under 12 Junior Academy. He also competes in many of the regions Pro Am tournaments alongside members teams. Having had a taste of hosting tuitional golfing trips abroad, this is an area he feels he would like to focus on and offer our membership in the future. 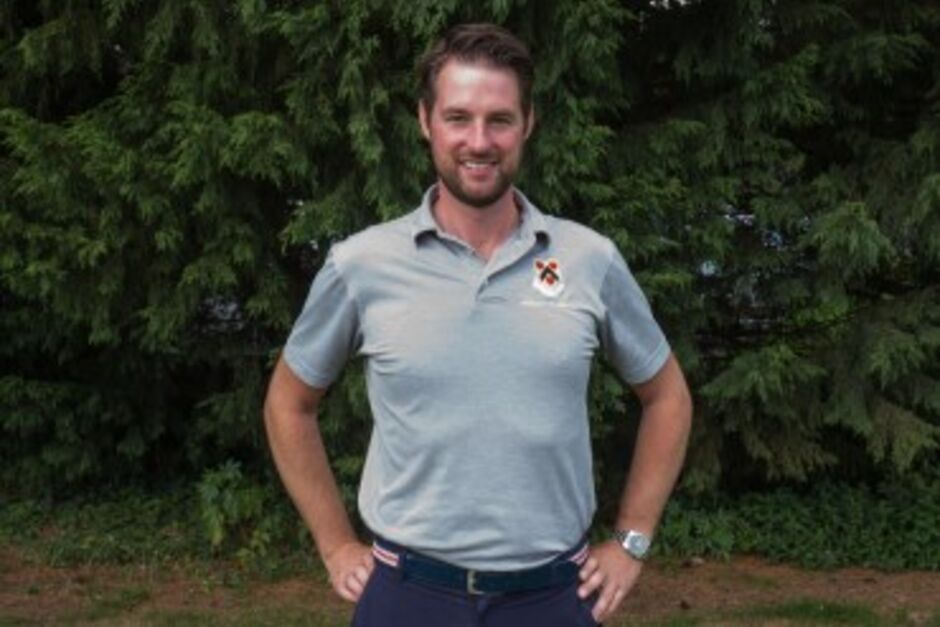