Stratford on Avon Golf Club was founded in 1894 in the Shakespearian village Wilmcote. Queen Victoria was still on the throne when six men and three ladies met at the Union Club in Stratford to form our Club.

We moved to our current site in 1924 when the course was designed by J H Taylor (five times winner of the Open Championship) and F G Hawtree. Sam Ryder opened the new course in 1928 with his famous professional Abe Mitchell (the figure on the top of the Ryder Cup) and three British Open champions. Sam Ryder was Vice President at the time and became Captain throughout 1929/31.

The Second World War was to wreak a temporary havoc to our course as large sections were set aside to vegetable growing and gravel extraction. Happily this has resulted in rather interesting challenges on our 10th, 16th and 17th holes.

The 18th century barn, courtyard and stables on the site have been transformed into our clubhouse today. The distinctive barrel roof bar open fire, shared by Sam Ryder and many past Ryder Cup players, remains for all to enjoy.
The above photograph was taken on 27 April 1928 it is of Abe Mitchel playing out of the left hand bunker on the 16th.

The book “A Confident Century”

The book tells of the development of the club from it’s first course in Wilmcote, then the 29 years at the 9 hole course in the Welcome Fields and the move to our current course on the Tiddington road in 1925.

The book using photographs, newspaper cuttings and many historic documents traces the contribution made by many members as well as some historically significant men such as Sir George Trevelyan, Samuel Ryder Henry Cotton and Max Faulkner.

The book chronicles the decision made in the early sixties to transform the course by extensive planting of trees to provide the heavily tree lined course that we enjoy today.

The competitions we play to this day:

Presented 1913
Mr Ludford Docker JP President 1925 - 1935 (secured the ground at Tiddington road site)
Bogey
The trophy was won outright by SBS Walker in 1925 and was presented by Lady Docker.

Presented in 1927 by the Shakespeare Hotel.
Medal

Presented in 1928 by H E Sheldon past Captain
Stableford

Presented 1952
DMC Silverman
A mixed competition played off the men’s tees with the Ladies having an extra 10 shots added to their handicap. Medal 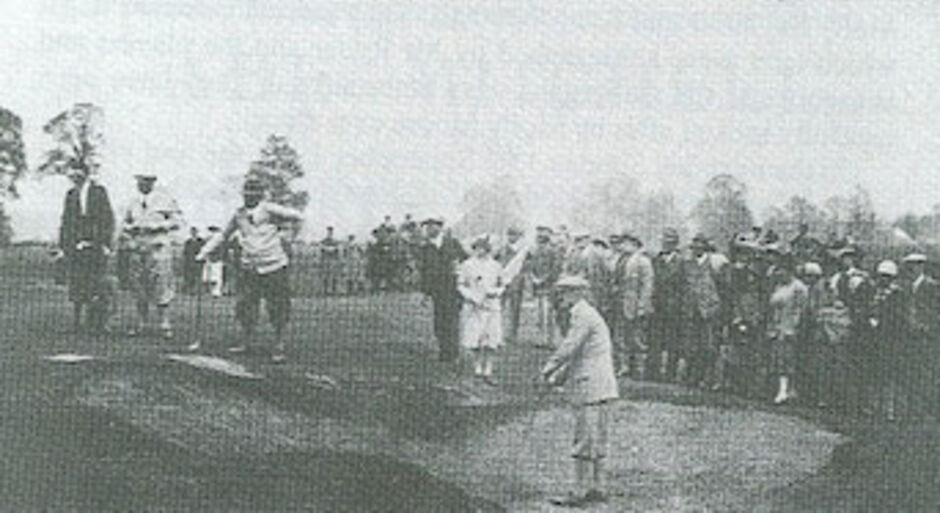